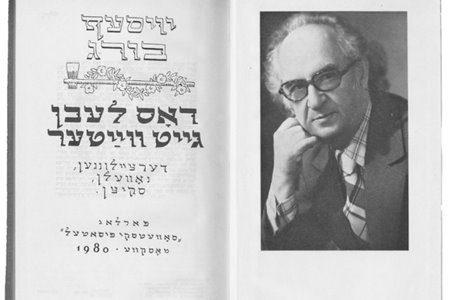 In a two-story townhouse on the 13, Sheptytskoho st., built in the second half of the XIX century in the style of historicism, from 1990 until his death at the age of 98 years lived the happiest years the famous Jewish writer Joseph Burg (1912-2009). In the apt words of Professor Peter Ryhlo, “the last Yiddish knight in Europe.”

This is reported on a memorial plaque on the facade, which is decorated with a luxurious sandrik. It was here in his difficult life came peace and worthy of respect. He was a man – a legend, in whose life the history of the entire twentieth century took place.

Joseph Burg was born on May 30, 1912, in one of the cult centers of Hasidism in Bukovyna, the town of Vyzhnytsia, which at that time was almost 90 percent inhabited by Jews. There he studied in elementary school and in Heder, a traditional Jewish school, where they interpreted the Torah – the Pentateuch of Moses. But all his life he proudly called himself Bukovynets. After graduating from high school, he studied German for four years at the University of Vienna. 1934-1937 – edited the Jewish newspaper “Chernovitser Bletter” (“Chernivtsi Leaves”) in Chernivtsi, until it was closed by the Romanian authorities in 1937. He later studied at the graduate school in Moscow. In the war and postwar years, he taught in the Volga region. For a long time, he taught German at school, then – foreign literature at university.

The author’s works reproduce true pictures of the centuries-long suffering of Jews, love and death, cruelty and mercy. The writer’s work preserves the memory of a large and glorious cohort of Jewish cultural figures who were associated with Bukovyna (M. Altman, Eliezer Steibarg, A. Margul-Shpеrber, I. Manger, A. Kittner, Sidi Tal and others.

The artistic space of Joseph Burg’s works is so unique that he could be envied by any writer: a multinational region (Bukovyna), where, according to Rosa Auslander, “four languages were used together”, in an era of sharp turns and shocking changes in history – this is the arena which unfolds the events of his books.

J. Burg was invited to give lectures at the most prestigious universities in Europe. Ambassadors of different countries accredited to Ukraine considered it an honor to cross the threshold of his home and communicate with him. He always, as soon as his health allowed, was very happy for the guests, regardless of their status.

During Gorbachev’s restructuring (1990), the Elizar Steinberg Society resumed (53 years later) the publication of the Chernivtsi Leaves newspaper. Its editor since then was J. Burg. In recent years, a number of books have been published in Ukrainian, German, Polish and Yiddish.

He was chairman of the Chernivtsi regional society of E. Steinberg.
In Vyzhnytsia, one of the streets was named after him.

For his literary work he was awarded the prestigious international literary prizes of Hersch Seglan (Israel) and Theodor Kramer (Austria), as well as high state awards of Austria and Germany. Honorary citizen of Chernivtsi (1997). With his passing into eternity on August 10, 2009, an entire era of one of the most distinctive European cultures rolled by.