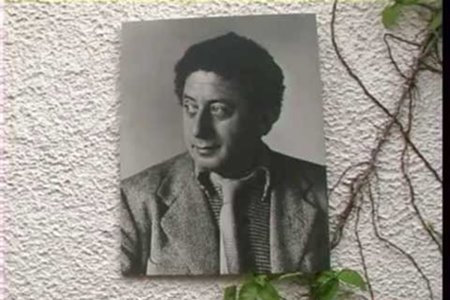 In a one-story house on the 31, Ruska st. lived the famous American artist, sculptor, graphic artist and architect Bernard Raeder (1897-1963). «I owe everything I am to Chernivtsi», – in this way he proudly spoke about himself and creativity.

Bernard Raeder was born in our city in the family of a hotel owner and was brought up entirely on Jewish culture and traditions. As art critic Tetyana Dugaeva outlined the peculiarities of his work: «The subject of his work was Jewish mythology and folklore, Greek mythology, the Bible, musical themes, as well as the figurative world of the humanist writer Francois Rabelais». The artist felt the city of his childhood very subtly and remembered it later: «We were born intoxicated by fantasy»
His youth coincided with the difficult years of the First World War – at the age of seventeen he joined the army. After the war he went to Prague, where he studied at the Academy of Arts. From Europe, B. Raeder returned to Chernivtsi, where the 20s and 30s of the twentieth century were a time of artistic activity and a bright creative rise of cultural circles – artists and writers. Being young and ready to search for art, he, together with such famous painters as Eusebius Lipetsky, Jacob Eisenscher, and Arthur Kolnik, created a department of the cultural and educational organization “Culture League” in the city, which lasted in Chernivtsi for seven years. During this time, B. Raeder created 21 tombstones for the Russian cemetery. One of the monuments in the form of a wall made of black Swedish granite – for the President of the Chernivtsi Bar Association, public politician Max Focshaner – still stands at the entrance to the Jewish cemetery to the right of the House of Eternity.
In 1930 he left Chernivtsi. Initially, the artist settled in Prague, and in 1937 he moved to Paris. There he met with the famous sculptor Aristod Mayol, which had a significant impact on his work. Their friendship lasted for many years. Complex historical events also affected the fate of B. Raeder. In 1940 he exhibited in the Wildenstein Gallery in Paris, but in the same year all his works were destroyed by the Nazis. B. Raeder was forced to flee Paris and Mayol provided him and his wife with a passage to move to Spain, where he was imprisoned for illegal entry. After his set free, he and his wife traveled to Havana, Cuba, where Raeder’s work influenced many artists.
In 1943 he moved to New York, but in 1945 he was paralyzed by a serious illness and concentrated on woodcuts and drawings.
B. Raeder received American citizenship in 1948.
Bernard Raeder exhibited at the 3rd International Sculpture International in Philadelphia in 1949, and is one of 70 sculptors in a photograph taken there.
He was regularly exhibited at the Whitney Museum of American Art and exhibited at the Philadelphia Museum of Art in 1949. In 1954, B. Raeder went to Italy to make sculptures in Rome and Florence. In 1956, it was arranged for an exhibition at the Galleria d’Arte Moderno L’Indiano in Florence, which received much attention and merit from art historian John Rewald. In 1961, he received a personal retrospective exhibition at the Vienna Museum, and for the first time in its history, the museum dedicated three floors to one of its artists.
In 1962 he was accepted as a member of the American Academy of Arts and Literature for his outstanding work. Bernard Raeder’s works are now in the world’s best museums and are regularly put up for sale at the world’s most prestigious auctions.
Bernard Raeder died in 1963 in New York. His last four years have been very productive, he has created more than thirty-five bronze sculptures. Many of them he created directly from wax, using the technique of casting lost wax, which he learned in Italy.